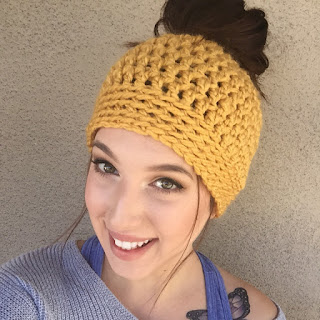 I’m not normally one to write about life updates on this blog. I’m typically pretty boring and it would be a lot of me just saying, “Today I woke up, drank some coffee and started the same crockpot meal I made last week.” But, I thought in honor of Halloween being right around the corner, it might be sort of fun to share a spooky story that happened to my husband and me this week!

I’d like to preface this post by saying my husband isn’t usually the type of person that gets freaked out and isn’t very superstitious. That being said, we both got pretty spooked and I’ve admittedly avoided going upstairs for the last 3 days.

It all started early in the evening this past Sunday. We were in separate parts of the house doing our own thing when suddenly I heard him calling for me. I answered back from downstairs and he came to the top of the steps, looking down into the living room area and says, “I was just checking where you were.”

It struck me as sort of odd and out of character, so naturally I asked him why. That’s when he had started to explain that he had been in the spare bedroom on the phone with his brother. He hadn’t been hanging out in there. He just popped in looking for a cable he needed for the computer. As he bent over to look into a drawer, the lights came on from the ceiling fan on their own. It’s one of those ones that has 3 light bulbs in it, but one of them is screwed in loose so it won’t turn on. Otherwise, it’s too bright. He looked up and noticed all three light bulbs were on. Then, one of them flickered before eventually going out completely-- leaving only two giving off a steady stream of light.

He came down the stairs and we sort of just sat in awe for a moment before convincing ourselves it was probably just some sort of electrical surge. It was the most logical explanation. Neither of us admitted to the other that we were slightly on edge and bravely headed up the staircase to see if the lights were still on. I went up first and carefully peeked around the corner to look into the room. Both lights were definitely still on, and it even looked like maybe the third was too. I walked in with my husband right behind me and as I approached the fan, I realized I had been mistaken.

I started to utter, “Oh, just the two lights are …”

Before I could even finish my thought, THE THIRD BULB LIT UP. I’m not going to lie ya’ll. It was so unexpected that I screamed, turned around to run, pushed right past my husband and caught him off guard so much that he started screaming too. I screamed right on down the hall way, down both flights of stairs, and straight into the living room. He wasn’t too far behind me and when we both settled down some, he admitted he had been yelling at me to figure out if I was me or if “something had taken over.”.

I’d like to note that at this point in retelling my mother this story, she was hysterically laughing. She says she wishes she could have been a fly on the wall watching the two of us scream like children. Her favorite part, specifically, is that it crossed my husband’s mind that I might not quite be myself. Mom, if you’re reading this, it’s still not funny!

Nothing else creepy has happened since, and my nerves have started to calm down. Looking back, it was sort of a ridiculous situation. But, at least we can laugh about it together now!

At any rate, I’m sure ya’ll are here for the pattern! I’ll keep this part short. As usual, you’re welcome to sell any hats you make using this pattern, but please credit and link back to this post whenever possible. This is the part where I shamelessly plug my Instagram (@i_can_knot_even) and let ya’ll know I love being tagged in photos of your crochet creations! Thanks for stopping by the blog today and don’t forget you can subscribe by email to receive free patterns straight to your inbox every time I post!

Notes:
·         CH at the beginning of rounds NEVER counts as a stitch
·         If you need to downsize this hat, try placing 24 stitches into the starting loop instead of 30 and follow the rest of the pattern as written. Otherwise, just follow the pattern as is.
·         I’ve been blessed and cursed with LOTS of hair, so I’ve made the opening for the messy bun pretty large in comparison to some other hats I’ve seen

Pattern:
CH 18. SLST into the first CH to create a loop (this is going to be your “messy bun hole”)

Round 1: CH 2. Place 30 DC into the beginning loop. SLST into the top of the first DC to close the round.

Round 2: CH 2. In the same stitch, place 2 DC. Then, place 1 DC in each of the next 2 stiches. In the next stitch, ** 2 DC, then 1 DC in the next two stitches. Repeat from ** (increasing every two stitches) until the end of the round. SLST into the top of the first DC to close the round. 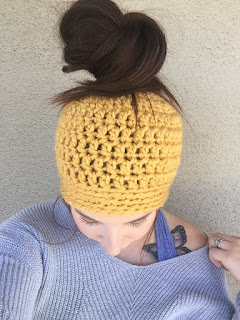 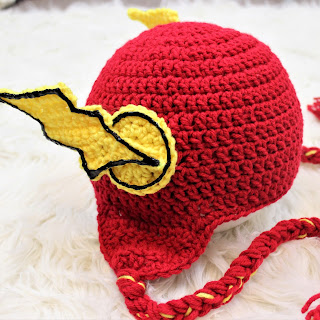 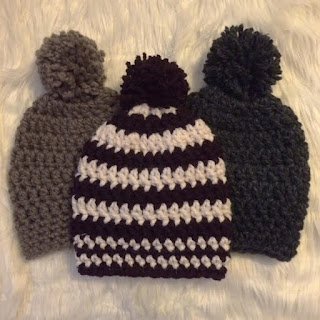